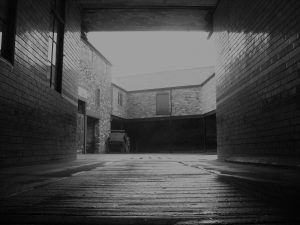 The night began with a tour of the building which turned out to be a lot bigger than we expected, after the initial set up we started the investigation in the stables. It was very warm in the stables but at once we heard some knocking and noise like something was moving about, two team members were drawn to the corner stall where a presence of a child was felt various sounds were heard from the stall, then a mist was seen by another member of the team.

Later on in the night there was a lot of knocking coming from the second room we investigated coffin room and we heard several undistinguishable words come through the spirit box.

Emma laid in the coffin on her own for a short while and then saw a tall shadow cross the wall, from left to right, we then checked to make sure that the cars outside didn’t make the shadow or any other external sources but none could be found,

Craig then lay in the coffin and asked us to put the lid on, some words were again trying to form through the spirit box but and people heard a dragging noise from the room next door.

Towards the end of the evening we broke up into smaller groups, our group decided to go back to the end stall in the stables and we heard some tapping noises and footstep walking around the stables, this was then followed by some table tipping, where we had a very small response, like a vibration.

After that we did a silent vigil with very occasional calling our questions, we were all focusing on a chair in the middle of the stables when Craig and Emma saw a very clear shadow move towards the chair, again we checked for outside sources but found none.

Lots of shadows and light anomalies were seen through the night as well as the feeling of unease, also some responsive tapping and some distorted word coming through the spirit box.