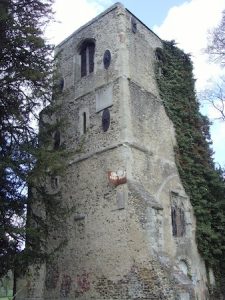 While you were all tucked up under your duvets preparing for Christmas, 5 of the team were out in freezing conditions exploring the Cold Christmas Church in Ware searching for the paranormal.

The church was once Little St Marys Church but was given the nickname because it can be found on Cold Christmas Lane.

The church was demolished in 1853 when a new Parish church was built nearby, the church stone tower remains.

Even though the church was demolished the graveyard remains along with the church tower. The grave stones have fallen into disrepair, headstones fallen and some are even broken. There are reports of a Mausoleum in the graveyard and that mass burial graves lie under where the old church once stood. Many graves belong to young children and is said to be due to extreme cold weather during Christmas time which lead to their deaths many of the gravestones still standing carry the names of the children that died.

Our night started with a very cold walk, we didn’t know at the time but we had accidently chosen the wrong path and this resulted in an hour and a half walk in which one team member managed to fall off a large log and land on their head managing to graze herself quiet badly, luckily she recovered enough to carry on which is just as well as we were miles from anywhere in fields and no clue how we would get help anyway.

When we reached the church, we were struck by its beauty and the way it stood tall among the trees and it seemed such a shame that it and its surroundings had been left to fall in such disrepair. The tower is now inaccessible due to vandals abusing the site so metal and wooden doors now seal what was the doors and windows.

The night Was cold, -8 to be exact and we started immediately calling out, during the night we saw light anomaly’s and shadows almost walking out from behind the trees, we were using the spirit box and we had a few words but what we didn’t realise was that we were recorded other words in the back ground that the human ear couldn’t here, including what sounded like “let me out” coming from inside the tower. We also heard sounds like humming coming from the tower that sounded like a child’s voice. A rock too big to be debris was thrown across the graveyard and landed at the investigators feet, a hammering noise was also heard from inside the tower at one point. We had a very eventful two hours and would love to have stayed longer but with the temperature being so low, ice forming and the threat of snow we had to leave, but you can be assured we will be going back.