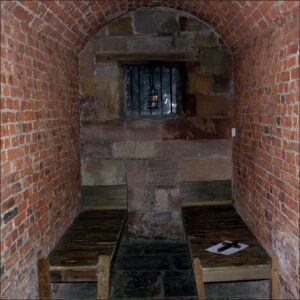 The term Derby Gaol historically refers to the five gaols in Derby, England. Today, the term usually refers to one of two tourist attractions, the gaol which stood on Friar Gate from 1756 to 1846 and the cells of which still exist and are open to the public as a museum, and the 1843 to 1929 Vernon Street Prison whose impressive frontage can still be seen today.

In 1652 the Cornmarket Gaol (no longer extant) was the site of the imprisonment of George Fox on charges of blasphemy. Fox became the founder of the Christian denomination the Religious Society of Friends, perhaps better known as the Quakers. It has been alleged that Judge Bennett of Derby first used the term Quaker to describe the movement, as they bid him to ‘quake for fear of the Lord’, but the phrase had already been used in the context of other religious groups so the etymology is dubious.

The last person to be hanged at Derby Gaol was William Slack on 16 July 1907 for the murder of Lucy Wilson.

The Vernon Street Prison served as the County Gaol from 1843 to 1919, at which time it was demolished. The last public execution at Derby of Richard Thorley for the murder of Eliza Morrow took place here in 1862. From 1919 to 1929 the prison acted as a military prison. Following demolition, the site served as a Derby Greyhound Stadium, and today contains prestige offices, though the historical frontage still remains.