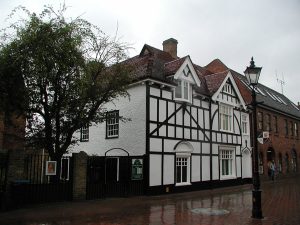 The Epping Forest is Housed in a Grade II* listed Tudor building in Waltham Abbey, the museum tells the story of the district through its collections and displays.

We had a lot activity in the ground floor room by the panelling from the abbey, we had a lot of tapping and small child like footsteps, this was followed by a child talking in the room and a baby crying at one point, one name we got in the room was Edward, there also was a lot of activity round the fireplace noises etc. and the Tudor trunk was mentioned on one of our pieces of equipment after we asked if anyone was in the room and where were they? The name Paige was also picked out which is strange because it’s my daughter’s name. A dark shadow was also seen in the doorway between the panelled room and the Tudor room it was like someone was just looking round the door at us. The feeling of hot and cold was going through the room and at one point we felt a breeze make its way round the rooms from one person to another.

One team had a lot of footsteps above them and could hear people walking about loudly at first they could find no explanation but then they found that there was a small attic flat above the building that could not been seen form outside and we didn’t know about so this was ruled out.

In the Room with the skeleton the night started with the K2 Going off and lighting up to the red light. At one pint the chain mail fell off the wall on its own accord with no reasonable explanation to be found.

When the team entered the room Kirsty felt extreme heat/discomfort on her back.

The stick man equipment picked up someone in the room next to us who was in the storage room with the big glass window at one point another figure joined it but didn’t stay very long, the names Jackie and Ethan a dark shadow was also seen in this room. We also got the name Sam which is my other daughter’s names who was in the room with us. Later in the night a small figure was seem on the stickman next to Apryl it seemed to have trouble staying with her but it was trying to move closer to her but then eventually disappeared.

One group returned to the Tudor room, two of the K2S went off, when asked to flash the lights the K2s went up to yellow in response. The name Victor came though when asked if he would like us to leave he said yes, then said hunted as if he felt like he was being hunted, when one team member commented that they thought he wanted us to leave it said exactly.

Overall a good day in Waltham Abbey and night at the Museum with some activity, Waltham Abbey was lovely and it was good to have the team together again.