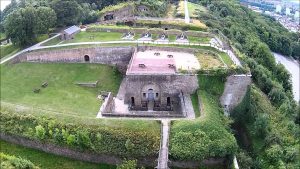 <a href=”https://www.cambridgeghosthunters.co.uk/investigations-2018/”>CLICK TO GO BACK TO INVESTIGATIONS 2019</a>

Fort Amherst is huge, simple huge, you are greeted by what looks to be quite a small are but in fact while we were on the tour we found out that not only is it a cave system but it also is up on a cliff and goes much further back than we first thought. The cave is only a small part of it and the association that takes care of it are still renovating some areas including a pavilion that hopefully will be completed ion September.

Whilst we were being shown around the caves we found that it was quite easy to get lost and that it was on several levels some which lead to the outside, although the gate were locked you could see the port beyond. There were so many twists and turns and small rooms leading off the caves that we found plenty of places to explore and we were looking forward to the investigation.

In 1667 the Dutch raided the River Medway and attacked Chatham’s Royal Dockyard.  During the devastating attack, thirteen ships were destroyed and two were taken including the flagship of the fleet, the ‘Royal Charles’.  At that point in time there were no defences protecting the Dockyard against a land based attack; and the raid by the Dutch led to a review of the defences protecting this important site.  As well as improved defence of the River Medway, the review included proposals to protect the landward side of the Dockyard which would also serve to disrupt an invasion party heading towards London.  This is where the story of Fort Amherst and Chatham Lines begins.

Part of the site chosen included a chalk pit with a number of caves.  These caves were extended between 1776 and 1805 to provide an underground labyrinth of tunnels, protected underground gun positions and protection in the event of a siege.  The tunnels contain many interesting and important features including a well, privies, loopholed defences, cannon positions and defendable gateways.

To ensure the protection of the Dockyard, three defendable gateways were constructed to control and defend access into the area protected by the Chatham Lines.  One of these gateways, the Upper Barrier Guardhouse, can be found within the lower portion of Fort Amherst.  The guardhouse housed a small garrison to defend the route from Chatham town by the use of a drawbridge, loopholed walls and a set of three heavy gates.  The barrack rooms within this building have been restored for your enjoyment.

Although Fort Amherst and the Chatham Lines were never put to the test, we can see from its design it would have made a formidable defence against any invasion force.  In 1820 the defences were declared obsolete due to better artillery equipment with a greater firing range.  The whole of the fortifications were used as a training ground during the Victorian period and the practice sieges were so popular that thousands of people came to Chatham to watch them.  VIPs were given seating areas upon the Casemated Barracks that once stood in the Lower Lines and also upon Prince William’s Barracks within Fort Amherst.  One of these sieges is described by Charles Dickens in his book ‘Pickwick Papers’.

When we first went into the cave system the group were split up as some were taking photos, one team member could here footsteps following her through the caves, she first thought it was another team member but realised she was alone.

The investigation started with the whole team building up energy in one of the caves, from the beginning the EMF meters went off and would be responsive to questions, despite search for some time to find a reason for this none could be found.

The footsteps continued through the night and many team members heard them at various different times, we did discover that sounds was easily carried through the caves and this made it hard when the teams split up as they could easily hear each other at times, but we did hear other voices in the caves during the night which we could define from any of the teams voices.

The evening overall was quiet compared to some venues but we though this might have been because another team had been in there all night the night before, however the in the last hour we had a lot of activity.

We started by sitting round a table and asking questions, we soon started to get tapping responses in answer to our questions, at time the cat balls also went off and  we could hear growls from time to time, we also heard more growls and voices along with the occasional scraping noises.

Unfortunately as the activity started we had to leave the fort, I think we definitely felt had we been able to stay things may have become now interesting.

<a href=”https://www.cambridgeghosthunters.co.uk/investigations-2018/”>CLICK TO GO BACK TO INVESTIGATIONS 2019</a>