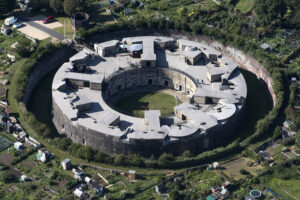 The Redoubt was built between 1808 and 1810 to protect the port of Harwich against the threat of Napoleonic invasion. It was part of the scheme proposed in 1805 that included the construction of 55 Martello Towers on the East Anglian coast, although 29 were actually built. Although similar in design to the earlier Dymchurch Redoubt and Eastbourne Redoubt, Harwich Redoubt differed in being designed to mount ten, rather than eleven guns.

The redoubt was built on a hilltop just outside the town, giving an unrestricted field of fire across the estuaries of the River Stour and the River Orwell which form the entrance to the harbour, and allowed interlocking fire with the guns of Landguard Fort on the opposite shore. The construction was supervised by Major Bryce of the Royal Engineers at an estimated cost of £32,000.

Harwich Redoubt is built mainly from brick with stone details, and is circular in shape, about 61 metres (200 ft) in diameter, with a central parade ground 26 metres (85 ft) across. The ground floor consists of 18 casemates or vaulted chambers radiating from the parade ground. These casemates were used as barrack accommodation, stores, ablutions and latrines, and a cookhouse. Two of them form the magazine and shell store; hoists lifted ammunition from the lower level to the gun emplacements, which are on a terreplein or gun platform formed by the roof of the casemates, which has ten embrasures for cannon. The ditch is some 16 metres (52 ft) wide and 7 metres (23 ft) deep, with a brick counterscarp wall set a little lower than the level of the parapet of the gun platform so as to protect the scarp wall from enemy fire