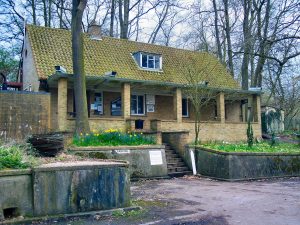 Update from our last investigation at Kelvedon Hatch Secret nuclear bunker. We were joined by Adrian Atkins and his team. The first part of the night we split up into 2 teams. Both teams experienced similar experiences, headaches and earaches. Both teams described the ear aches as a sharp pain like you pushed a cotton bud too far into your ear.

There was a lot of doors slamming, The Cambridge Ghost Hunters when to investigate the banging noises to see if it was the other team moving to another room. The other team was up having a break and they thought it may have been us. Later on when the teams joined up together the doors were still slamming when everyone was in the same room together.

There was a couple of voices come through on the spirit box but it was hard to make out what it was saying. On the stick man there was a figure come up by a bed in the operations rooms it looked like someone was crouching by the bed. When a team member stepped towards the figure it shrunk and disappeared.

Adrian picked up on a lot of people around the bunker when he was in the male dorms he felt a presents over his shoulder. At the time Ron the spirit photographer caught a picture of a white mist over Adrian’s shoulders. Adrian also picked up on a woman in the operations room which was a cleaner who was pretending to be a nurse. She ran her finger down Adrian’s back and he also felt something touch the left side of his face, Ron also took a picture which looks like a hand touching the side of Adrian’s face. Ron also captured a picture of lots of lights which look like orbs moving around a door like its tracking through it.

It was a great night and the Cambridge Ghost Hunters are definitely going to be going back at some point for another investigation. Thank you to Adrian and his team for joining us!

Diane was play acting at being a nurse and as she was tending to her patient a figure appeared under the bed, at first we thought that the figure was a child. 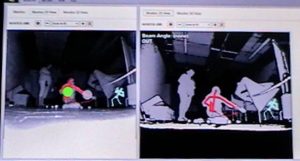 Craig then passed the teddy bear to the figure but no interest was shown, we then realised that it was unlikely to be a child s it seemed to have folded legs in the crouch position. 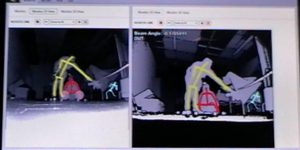 Loressa was able to get the figure to respond to the rolling balls a couple of times, but when she tried to approach the bed to get closer the figure retreated and dispersed. 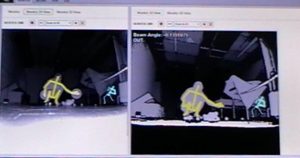