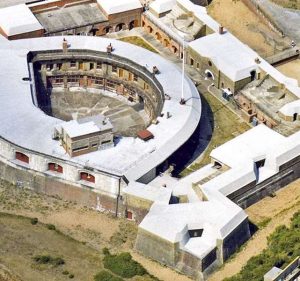 Being a summer venue and the weather being on our side we decided to start the day a little earlier on the beach and meeting up with some other members of the team during the day, although the weather was a little unsettled we had a good day on the beach paddling and eating ice-cream.

The fort itself was active from the time we got there, as I walked around the rooms I had a sharp pain in my head, the pain stayed with me while I wandered round the room but as soon as I left the pain disappeared.

The investigation its self was quieter than last year but we had some good activity, I joined with a small group and went out to the beach area, some of us heard voices and footsteps, then I felt something take my legs out from under me, it was an odd feeling, no pain but it was like a force pushed my legs at the knees and I fell into a very untidy pile on the beach, apart from being stunned I felt fine but it was very strange.

In the fort itself through the night I saw shadows including a figure in the toilet area that seemed to peek out from behind a wall, there were also footsteps and various tapping and other noises.

It was quieter than normal but we will definitely be returning and investigating again in the near future.

Landguard fort is an amazing location with a great view over the harbour.. It was a pretty quiet evening at the Fort..

As we started investigation in the tunnels we picked up on a figure on the SLS (structure light sensor) by the doorway of the old toilets used by the soldier’s.. Which was opposite the entrance of the tunnels.. As we went into the tunnels we had responses on the rem pod we put down, to questions we asked..

After a break our group went to the shower room where a soldier was alleged to have been killed. I sat in the cubical next to where the alleged attack took place where a figure appeared next to me on the SLS which looked to be hitting me on the head to which I started to get a little headache..

Later during the night we returned to the tunnels splitting up into 3 different rooms.. We had a portal running in the room and asking for responses. We had the name “Tom” come through asking if he died at the Fort “yes” came through then “bullet” but after that it seemed to go flat..

But enjoyed the evening with the team…

Landguard fort night started off with activity almost immediately to the entrance to underground tunnels activity was seen on the SLS. Then three of us walked along the tunnel in the pitch black at first there was no activity but on the way back we heard footsteps behind us, we stopped turned around and saw a shadow at the far end of the tunnel where there was a shaft of light.

The fort went a bit flat around midnight until I was informed by that a message had come through for me whist a vigil was being undertaken in artillery room. The message said I love you and miss you, it said it a few times and then when asked it said it was a message to me. I went into the room and did a lone vigil in the room and I got a message from a relative. That was amazing to me and I was in shock so went to find the others and had a rest and drink

A place of character and a very clear remnants of what once went on there. Also a very creepy place. The tunnels were obviously very dark but also very eerie, had a few disembodied footsteps and shuffling while everyone was accounted for.

A few of us had a little walk down the road near the beach and a few of us, on separate occasions, heard disembodied voices with our own ears. I heard what I thought were footsteps and shuffling around in a bush, may well have been an animal. What was strange, however, was that I felt something was trying to grab my attention but as soon as I asked out, I got no response. So I turned to walk back towards the others whom carried on walking as I stopped.

Emily was looking back for me and said that as I turned to start walking, a tall shadow figure darted out of the bush and shot off behind me.

The last encounter I had experienced was in one of the rooms high had two baths in it. I saw a dark shape move behind three of the group which were sat in the bath and literally just at the point I was about to utter the description of my visuals, all three of the ladies sat on the side of that bath jumped up screaming (wimps) and said they felt something right behind them! Very odd.

Although we didn’t receive an awful lot of activity at Landguard fort, I was a very cool place steeped in history and I would love to go back to hopefully experience more of what it has to offer as a big paranormal venue.