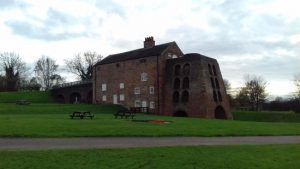 This was the Cambridge Ghost Hunters 2nd visit to the furnace and it didn’t disappoint, as always, the sun was out and the scenery was beautiful, it’s a very large venue with varied places to go from the furnace itself on the river to the ovens and woods it is stunning and we encountered a few dog walkers etc also enjoying the view.

As for the investigation it didn’t disappoint either and there was plenty of activity to keep us busy through out the night and as it didn’t get dark until about 10pm we had plenty of time to settle in and explore.

The History of the Furnace:

Sir Francis Rawdon Hastings, the second Earl of Moira, built the furnace in 1804. It was built to produce iron which was used to make machine parts, tram tracks and cannonballs amongst other things.

It was built in 1806, at a cost of £30,000, beside the newly opened Ashby Canal which was to bring raw materials to the furnace and carry the finished iron to be sold in other parts of the country.

The furnace worked from 1806 -1807 and again in 1810 until 1811 when it was blown out. Despite plans to restart operations later in 1811, and even to build a second furnace to operate alongside the first, it appears that no further iron smelting took place. When restoration took place on the furnace in 1981 it still contained a working charge (the last lot of rocks ever poured in to the top).

Something went wrong during smelting that damaged the furnace beyond repair. It seems that the top of the furnace (rather than the bottom) became much too hot causing the chimney lining to melt and fall into the furnace.

After this, the furnace was shut down though the foundry attached to the furnace carried on working for another 40 years or so using iron made elsewhere.

Moira’s future lay with coal not iron. The furnace building survived because it was used as cottages, some of which were lived in until the 1970s.

I had a great investigation at Moira’s Furnace.

Thank you to our guests who joined us on the night.

It turned out to be an active investigation with a lot of banging like someone was walking up and down the stairs. Strange dragging noises in a room above and communication through the spirit box.

The thing that stands out the most to me was when I picked up on a young child. My team were all sitting in the base room quietly and for some reason I kept picking up on a young boy with high grey socks, dark jacket and an old-style cap. I couldn’t get any information on the boy or know where he was. All I was picking up on was that he was crouched down holding his arms around his knees. He was very lonely and didn’t have anyone to play with. At the time Matt couldn’t pick him up but later in the night he managed too, and he said that he can pick him up on the top floor of the building. It wasn’t until I was telling people what I was picking up on that Emma said “have I seen the report?”, Which I replied no she has them and I haven’t seen it yet and asked why. Emma got a report and read that there has been siting’s of a young boy seen crouched down by the mouth of the furnace. I was shocked by this. I didn’t see him by the furnace but was able to pick him up in the building.

Moira furnace is a beautiful place, it has it all, the historic building, the canal, lovely gardens and a museum. The night started in a top room of Moira. We laid out 3 emf K2 meters and rem bear to which all the started to go off at the same time with responses to questions being asked… During a séance we laid 2 K2 meters apart in the centre of the circle of the group which also was interesting. Upon asking questions only one meter was set off with made this more validating. Whilst doing the séance we also had a shuffling like someone was walking at the back of the room.

After a break all the team including guests gathered in the wooded area. We had activity happening around us but when investigated it just seemed to be moving from one place to another.

Later during the investigation, a group of us went to the top of Moira where you can look down inside the old kiln ventilation shaft. Before you walk out onto the roof was a large area which had mannequins of how they worked during the operation of the kiln. In this area I asked the group to sit in a circle hold hands with the portal running in the room with them. as I went outside on the roof closing the door, so they couldn’t see me or hear me, I spoke quietly ensuring the group couldn’t hear what questions I was asking, To which at one point I asked for a member of the group to be touched and with that I hear someone inside shout I’ve just been touched on my shoulder which was amazing as it had done this on que.

After another break our group went into the museum as they went in I ran back into the entrance of Moira to gather more equipment and just as I went to go up the stairs I heard someone moving around on the stairs above me, which was strange as everyone else had left the building investigating in other areas, I called out “Hello who’s up there?” to which the movement had stopped.. I went up the stairs looking in every room to find no-one up there.

I’m not going to lie but at this point the blood was pumping.

All in all, a very beautiful location to visit and a great investigation.

Moira Furnace Did not disappoint right from the start the first room we investigated which was upstairs on the third floor was extremely active we had a number of K 2,s and had two teddy bears and cat balls amongst other devices of which all kept going off simultaneously responding to questions.

Our group then went to other areas of the buildings such as the kitchen and the furnace and had very similar results we got the name Katie coming through regularly and at one point a colleague went outside and was asking questions which we could not here and the spirit box gave us answers even more interesting was the fact that I was touched at one point on my left shoulder and when Peter came back he said he asked if somebody could touch somebody in the room. We kept getting drawn to the room at the top and on our last visit had responses on the K2, s interacting with the glass work.

Moira furnace is a cool place and it held some weird goings on whilst we were there. A few others and I were in a group up on the top floor of the first building. The atmosphere got a bit strange and a lot of the group felt strange. I myself got a headache whilst we were in there. We received intelligent responses through the k2 meter as if it was agreeing with us. Matt said it was a lady that resided there once upon a time and doesn’t like strangers entering her space. We all also heard what sounded like someone physically walking up and down the stairs. It was so loud that we were shouting down asking if it was another member of the team, but we received no answer. So, a few of us went down to see if it was one of the team, however, we couldn’t see anyone. Until we got outside to where we initially left Emma and Tasha sitting on the bench. We asked if it was them and they said they thought it was us. No one could have entered the stairway without either team noticing. STRANGE!

There was also a very strange bubble of energy in the woods. A few of the team broke off to move into a different area of the woods and it was quite a heavy and uncomfortable feeling. Almost like the energy was circling us. Then we saw what we thought was a shadow figure standing towards the entrance to the woods. When Craig and Matt started to move towards it, it moved out of sight and the strange energy feeling dissipated.