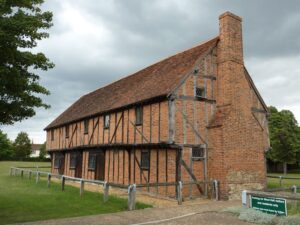 Credit – Clive Arnold. Pilgrim House Publishing © 2014
https://moothall.weebly.com/history.html
In the early 12th century, Elstow Abbey was granted a charter by Henry I, permitting the nuns to hold an annual fair, from 2nd to the 5th May. Unlike modern fairs, these were commercial events, where all sorts of products, livestock, clothes, food etc., were sold.
Elstow fair was large, occupying not just the village green but several adjacent fields. The Abbey raised almost a quarter of its income from these fairs; by charging rents for stalls/ booths, levying tolls for entry and taxes on sales. They probably also had their own stalls from which the nuns could sell produce from the Abbey.As the Abbey grew, cottages to house tradesmen and other lay workers were built; also several inns, to house the many visitors to the Abbey and its fairs. All of the Elstow properties were owned by the Abbey, which also owned numerous other buildings and land in the surrounding county of Bedfordshire as well as in 10 other counties. The rent from these numerous properties generated the bulk of the Abbey’s substantial annual income.

Perhaps the Abbey’s most unusual building project was the “Green House”. Designed to serve as a market-house and courtroom, it was built in the late 15th century, possibly by the Abbey’s then carpenter, William Arnold.

The ground floor of the Green House was divided into bays, most being used as shops. The upstairs was used for “courts of pie powder” – for hearing disputes arising at the fairs, examining merchant’s credentials and testing weights and measures. As ‘Lord’ of the Manor, the Abbess, or her steward, would have presided over these courts and Elstow’s local administrative Manor Court sessions.

Fairs continued to be held during the days of the Hillersden family, though on a smaller scale and the Green House continued to be used for Manor Court hearings; In 1554, Thomas Bonyon (John Bunyan’s great, great Grandfather) was a member of the “homage” (the Court’s presiding jury) when his wife was fined 1 penny for ‘breaking the assize of ale’. She also appears in subsequent court records, for committing further offences involving the sale of ale or bread!

In 1773, the Hillersden family consisted of just two sisters and, their finances dwindling, leased the Green House, its equipment and fair tolls to Thomas Coleman. In the 1790s, they moved out of “Elstow Place” which was left to fall into ruin and they sold the Elstow estate, piece by piece, to Samuel Whitbread. The 1800 Enclosure Act allotted Elstow Green to Whitbread, who subsequently purchased privately-owned houses in the village. (The numbers on houses in High Street, Wilstead Road and West End today are still Whitbread Estate, not street, numbers.)
During the 19th century, the Whitbread Estate used the Green House’s ground floor for storage and the upstairs  became – on Sunday evenings – home to Elstow’s Congregation of the Bunyan Meeting church. Bunyan, who fought for freedom of non-conformist worship would probably have been pleased to note that the congregations in the Green House were regularly larger than those in the nearby Abbey parish church.
From 1810 the upstairs was used during the day on Sundays as a National and on various days as a Night School.
The pastor of the main Bunyan meeting church in the late 1800s was the Reverend Dr John Brown and he published a biography of John Bunyan in which he referred to the Green House as ‘what we may call Moot Hall’. This appears to be the earliest recorded use of this name , but it is appropriate – ‘Moot’ being the medieval word for “meeting”.
The Sunday school continued in the Moot Hall until 1873, when compulsory education began and the children moved to new, purpose-built premises in Elstow’s High Street. The Bunyan Meeting continued worshipping in Moot Hall until 1910, when they moved to a new chapel, next door to the school in the High Street.

Fairs continued to be held on Elstow green long after the Abbey had been abolished – sales of cattle only ceased during the First World War and afterwards only a small pleasure fair continued, until that too ceased during the Second World War. The stump of the original Market Cross – which denoted Elstow Abbey’s Fairs as having Royal Charter status – still stands, some 50 yards west of Moot Hall.  The May festival was revived in 1925 by the headmaster of Elstow school and flourished until 1968 when the schools changed to three tier system.
In 1950, Major Simon Whitbread gave Moot Hall and Elstow green to Bedfordshire County Council, which restored the building as their main contribution to the Festival of Britain. A year later, Moot Hall was made a permanent museum, to illustrate English 17th century life and the life and works of John Bunyan.
The May Festival was revived again in 1974 on a small scale at the lower school and returned to Elstow green in 1998.

Moot Hall – construction
When first built, the timber frame would have been in-filled with wattle and daub, rather than brick. The original building had only four bays on the ground floor, the western-most two bays each containing two small shops. Each of them had a separate door with a broad window, with a four-centred arch above. These ‘windows’ may have consisted of a wooden panel (rather than leaded glass) which could be let down and used as a serving counter. Most of the main timbers between the shops remain and slots in the ceiling and floor timbers show where the remaining uprights stood. The timbers have numerous nails in them, from the original wattle and daub partitions.
The fourth bay contained a separate room, with an east-west ladder stairway to the upper storey, which consisted of one large hall. The external door to the fourth bay was probably at the southern end of the east wall.

Within 100 years of the building’s construction, a fifth bay was added to the east end, including a large chimney breast. This extension contains fireplaces on both storeys, suggesting that it was designed as accommodation for important visitors to the monastery. Probably at the same time; the window in western wall was moved to a higher position; a cellar was excavated under the fourth bay; a north-south staircase erected; an Elizabethan doorway (now removed) inserted into the north wall where the eastern-most shop stood and all of the external wattle and daub in-fill replaced with bricks.

In 1950, during the County Council’s renovations, the original medieval form of both floors was restored and the window in the western wall moved back down, but the external walls’ brick in-fill was retained. The Medieval roof was also left largely intact, with new rafters being laid over the originals.

Similar late-medieval market houses, with shops below and a long chamber above, are rare. Two others survive in Buckinghamshire – at Long Crendon and West Wycombe and a similar, but later, example is to be found in Bedfordshire – in Leighton Buzzard.  Moot Hall is the only known example of a courtroom, built for a nunnery, containing a shopping centre and a guesthouse.
​