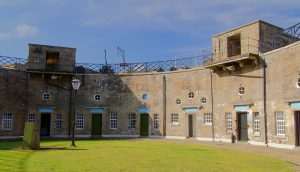 So it’s the last investigation of the season and we prepared ourselves with the normal thermals ready to investigate the very haunted fort, after going through the normal health and safety routine and Craig being given a tour we began the investigation by splitting into three groups, we had several guests with us during the night including Adrian and his team who were investigating in their own team for the night.

The teams started at three points around the fort and the night began.

From the off our team seemed to be having a very quiet night, in the first few rooms we got some tapping and slight responses to our questions but nothing much seemed to be going on, we moved round the fort from room to room but very little was picked up until we got to the cells, as soon as we went in the cells the atmosphere changed, the middle and the end cell seemed to have a different set of responses coming from it, the Ovilus suddenly started to give out names, in the middle cell it was Norman, we also got the name David and other names, we felt that there was a darker force in the end cell and it didn’t seem to like women in there so I stepped out into the corridor but this made no difference.

After a break we continued around the fort, we picked up more names and sometimes got weak responses from our trigger objects but very little happened through the rest of the night.

Normally the fort is known for its activity and I have witnessed it myself before, it’s normally a very active location but maybe the spirits were taking the night off or they considered it to cold, whatever happened we will return to the fort again as we know that the activity will still be there.