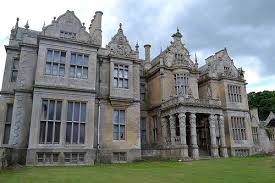 We had a busy night at Revesby abbey this year, the activity was pretty much from the time we got there till the time we left. When we were there in November it was dark when we arrived so it was a treat this time to see the building in all its glory in daylight, and it didn’t disappoint, its stunning beauty with an edge of haunted mansion thrown in for good measure, with clear sign of nature trying to take it back. However a lot more renovation had been done this time so it was clear to see how much the building had changed and with more on the upper levels having their floors back it made it easier to distinguish the noises in the night ahead.

Before the investigation began we heard what sounded like footsteps above us and tapping noises and voices, sometimes an individual moan, other times it sounds like a group of people talking.

Onto the investigation, one group heard responsive tapping in the store area, we could tap on the wall and we got a reply, we also asked questions and we would receive an intelligent response of two taps for no, one tap for yes, however it seems the responder was having fun with us and we received very little that made sense and decided to move on.

Whilst one group was in the wine store they heard voices, it sounded like a group of people having a conversation, bearing in mind the building was deserted at the time and the second group were in the far side of the building and could not be heard from the groups location tis has remained unexplained.

All through the night, people in the group were being touched, each time the person was nowhere near anyone so this remained unexplained.

There were temperature changes all through the night but the most memorable was when two members of the team were using a temperature gauge and pointed it in the same area when a member of the team felt a cold area, this should have resulted in both the gauges reading the same temperature but there was a significant difference between the two gauges of several degrees, this should nit have been possible, however when tested again on the same area when it wormed up, both of the gauges read the same.

Footsteps were heard above in various rooms, however one team heard an excessive number of footsteps that seemed to have a rhythm on further investigation one team member identified the footsteps were in time to the waltz, again no one was on the upper levels so this was not explained.

We also saw a lot of shadows during the night and had heavy metal doors moving, also Jamie and Matt saw a black mass.

During the night, we also tried out a new piece of software which acts in a similar fashion to the Ovilus. The ovilus only has a data base of about 1000 words so any words it comes up with outside of the range on the database can be classed as unexplained, we had several words that were in context with our surroundings that made sense to us at the time, one member of the team was touched on her hair, the word “hair” came up on the iPad. Whilst we were in the wine cellar the words, “drink and slur” came up. We also got the name EDNA, other significant words included, coffin, stigmata, tools threat and dirty, the last two came up when we went into a very dirty room and immediately we felt like we shouldn’t be in there. The software will need more testing but be felt that used properly with a few tweaks it could be of some use.

As you can see we had a very good night at the abbey and have already booked up there again for next year….watch this space