Sandford mill is made up of many large buildings, three of which we had access to, the water tank building is three floors on many different levels, the top floor is to dangerous to access whereas the first floor is filled with huge disused deep water tanks, there was no power in the building so there would be no interference with any of the equipment but at the same time would have made it impossible to use CCTV. The second building was another huge barn sized building where the original Marconi building was rebuilt inside, there was a lot of old radio equipment and several clocks which we had to take into consideration. The third building also contained our restroom which was inside a large ware house that stored some of the new museum pieces including an old tram that was being restored.

The night began in the water tank building, from the beginning load of bangs were heard within the building and no obvious causes could be found, there were many rooms for the team to break off into, some team members went into a small storage room which may have store medical equipment. In this room we picked up the name Hilda on the voice box, she also seemed to like playing with the lights on the EMF meter and teddy and was able to use them to respond to some questions. During this time we also heard voices around different areas of the building.

The second team was using a voice box and they got the words fire and alcohol and it was indicated that 3 people may have died, there were many consistent words that lead to the possibility that the communication was indicating that there may have been a fire that was caused by a drunk or alcohol.

There was no record of any fire in this particular building but there are been other buildings there or nearby before that may have had a fire, there are there no available records to find this out.

The team then decided to take a break which is when the discovery of the “figures” outline was found in one of the pictures, there seems to be a green light in front of the figure and it is surrounded by mist which seems to have faces in it, we do know that there was no one in front of the camera and despite trying to recreate the picture several times through the night we were 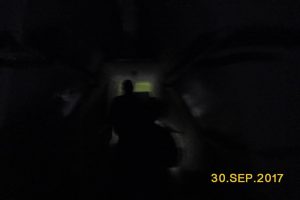 unable to find any rational explanation for the figure seen in the picture. As for the green light, there was no power in the building and there was no surface reflection, and no other pictures taken at the same time and during the night had the green light in them.

Right from walking through the door there were lots of knocks, some of these could be written off as the clocks and chairs in the building and it was too hard to break one noise from another so we decided to go to the hut and spilt the group into the two rooms. The first group heard some knocks and bangs in the room and heard some voices.

The second group had a lot more activity, there was hair tugging, if people sat in a certain chair in the room they instantly felt sick, some people in the room had to leave because they actually felt so ill, there were feeling of dizziness and at one point Matt and Vicki’s head seemed to disappear into the shadows which was really strange, the feeling of a presence between Cheryl and Matt was also felt, things seemed to calm down after that but there was an overall feeling of unease and general un-wellness which disappeared the moment you left the building.

Some of the team decided to return to the tank building to see if they could recreate the picture that Cheryl had taken previously.

Even as we entered the building were knew there was a significant change in the overall atmosphere to the building, it was a very heavy feeling, not one that worried us but it was a big change to earlier in the evening, as we walked down the metal walkway a feeling of unrest was building with in the team, we continued to take pictures then came to the bottom of the stairs that led to the tank room, jade started walking upstairs and as she did we heard a bang from the tank room, jade got to the top of the stairs and saw a figure walk across in front of her to the side, at the same time I glanced to my right (I was at the bottom of the stairs) and saw another figure walk across the corridor in another area of the building, the three remaining teams members were in plain sight so we know it wasn’t them, whilst we were working out what to do next the atmosphere changed again and it became very dark, at this point we decided to leave the building, one to calm ourselves and two to get the rest of the team.

Once we had calmed down the whole team decided to return to the building, the atmosphere was still bad so we agreed to stay in small groups, the dark feeling seemed to cause an irrational fear in the group and no one was feeling very happy to be in there, despite there being windows and a full moon it seemed to get very dark and some of the group wanted to leave instantly, there were also moans and some of the team saw more shadow figures so a small group remained for a short while and heard more banging and voices, we then decide it would be a good time to take a break.

Whilst on a break the team decided to try table tipping in the water building, not much response came from the table but the room went very cold and one team member felt her hair being pulled, again the unpleasant feeling was there and the team decided that as we were running out of time at the venue it might be a good time to leave with the view to return, keep an eye on the shop page as this one is not to be missed.

We felt that we were in someone’s space and they were doing anything they could to get us to leave because and I (Jade) walked Sammie out of the building I felt normal not the adrenaline surge I had inside the building it’s like they were fed up with us being there.

So upstairs in the abandoned block to start with we were getting a lot of generated words all on topics and some seemed to be as direct answers to our questions ,also we were in the upstairs office room the one with the sink on the floor in the middle and I felt my left shoulder being poked it was just once and it was like a single finger poke followed by shuffling up the stairs in the corner coming up from the dead rabbit room, we then went down the main steps and while we were walking down we got ” be wary ” come up on the app followed shortly after by ” go” to which we decided to get out.

While walking down the small corridor to get out there was a loud bang very close behind me and Jamie that sounded like a stone hitting the metal walk way which I think Jamie also heard? I turned to have a quick look but couldn’t see anything but at this point I wasn’t going to stay to long, nothing of note happened to me the second time we went in apart from “medicine” coming up on the app in the small office with the first aid poster .

The third time after I set the table up in the first room I got the strong feeling that I shouldn’t be there anymore but to be fair I had worked myself up a little bit by then.

In the actual museum in the radio hut a lot of the team started feeling sick at different occasions and I came across dizzy , apparently my head kept disappearing as well, at one point me and Cheryl were standing in the corner and we both felt something standing in between us and we both felt it went cold Vikki took a temperature reading and it was a good 3 to 4 degrees difference , it was an amazing night and I know a lot of people felt other things too I’d love to go back that’s the first time for me that I’ve experienced a lot of things that I couldn’t rationalise in my head

Before we left when we were told to go, something pulled on the back of my fleece I was wearing, I turned to Cheryl and Vikki and asked if they pulled my fleece, they did not and the boys were in front of us!

Also I heard the stone hitting the walk way as we were in front of the boys.

Also reluctant as I was to go back second time, when we were table tipping I was really cold and something was playing with my hair!

I have never experienced anything before!