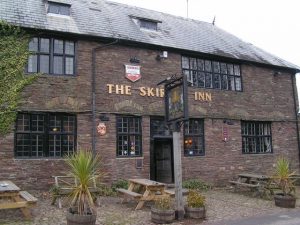 The Cambridge Ghost Hunters had a great day and night in wales this weekend, investigating the Skirrid inn.

During our investigation we had a lot of different experiences between the team. On our cctv we captured a lot of orbs in bedroom 1 and 2.The doors to the bathrooms in bedroom 1 and 2 opened by themselves causing a creaking noise. Down in the bar area there was a lot of unexplained noises which sounded like a metal hinge on the door being played with. some noises were ruled out due to the sound of the dish washer. but the metal sound was unexplainable.

There was a few voices come through the spirit box but it was hard to determine what was being said as it wasn’t very clear, these will be listened back to on the evp recorder as it may have come out clearer. There was quite a lot of shadows seen around the bar area.

While doing glass work in bedroom 2, the name fanny come through. when asked the dates like when was she born and when did she pass, it said dates. But the dates given were incorrectly. The team went down to the local grave yard eairlyer in the day where fanny and her family members were berried. So this helped with noticing the dates were wrong through doing the glass work. So the team were unsure who it was that come through.

Towards the end of the night the Camera that was left in the bar area started going off. As one of the investigators went down to check why, he got the camera started working again as he turned he see a full body apparition of a man sitting in a chair and he turned to look again it was gone. This shocked the team member. This morning telling the workers of the Inn about our experiences. One of the workers said that once he was in the bar area alone once the bar was shut, and he heard a loud cough from the same area, when he looked up no one was there. So this was quite interesting that both an investigator and a worker of the inn both had experiences in the same area of the bar alone.

The Cambridge Ghost Hunters are definitely going to be going back to the Inn to investigate at a later date.