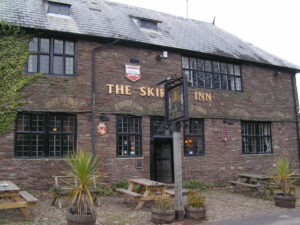 The Skirrid Mountain Inn is a public house in the small village of Llanfihangel Crucorney, just a few miles north of Abergavenny, Monmouthshire, Wales.

Citing work undertaken by the Glamorgan-Gwent Archaeological Trust, the Inn is mainly a mid-late 17th century building in construction. Forde presents the theory that an inn had stood on the site previously due to it being situated upon a pilgrim trail that led to Llanthony Priory, although there is no evidence to verify this.

A popular legend is that the inn was used as a rallying point for local supporters of the Welsh Revolt against the rule of Henry IV, the uprising being led by Owain Glyndŵr. He is said to have personally rallied his troops in the cobbled courtyard before raiding nearby settlements sympathetic to the English in the 15th-century. However given that the inn wasn’t built until the 17th-century this story should be taken with a pinch of salt.

Another, somewhat dubious and undocumented, claim to fame is that the first floor of the inn was “reputedly” used as a Court of Law where capital punishment was imposed for certain offences, including sheep stealing. Legend has it (but with no historical evidence) that as many as 180 criminals were adjudged guilty of crimes serious enough to warrant the sentence of death by hanging, a sentence that was “allegedly” carried out at the inn itself, from an oak beam over the well of the staircase. Markings, “said to be” from rope marks, still exist on the staircase wood.

The inn has, based on these unverified and undocumented stories, a reputation for being haunted by several ghosts or spirits and has been “said to be” the scene of numerous supernatural occurrences or paranormal activities. The inn was featured on TV’s entertainment-only Extreme Ghost Stories and Most Haunted with Yvette Fielding.