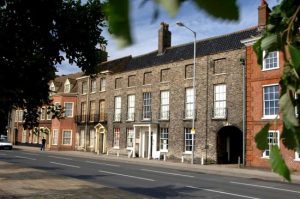 The Elizabethan house is 5 houses that have been restored and fused together by the removal of the passageways that used to run between the houses, it is set on the Quay across the road from a busy and wide river.

From the time we arrived we knew we were in for a good night, the atmosphere in the house was alive and we were treated to a tour by our host for the night (Stuart) before the investigation started. Even whilst setting up the equipment members of the team heard the sound of children’s voices and at one point a baby crying. We split up into two teams and so began the investigation, as you can see from this report we had a very active night.

Team 1 – Lead by Craig and Notes Taken by Loressa.

The team began in the Bedroom – Whilst using the thermal imaging camera Craig picked up a metal plate that was showing up on the camera as warm and bright, although when it was touched it was cold to the hand.
One guest (Wendy) said they saw the speaker on top of the drawers move, this was verified by other members of the team.
The REM cube lights were going in time to communicating with the team members.

A load bang was heard by the team and no explanation was found as to where it came from, the team asked if there were three spirits and the lights went off three times to confirm this, the team then asked if they could find the blue colour and the blue light went off.

The team then said they were leaving the room and going to the children’s room and asked if the spirits would like to join them at this point all of the lights went off, the team asked again and the lights went off again whist the blue light stayed on.

The team then moved to the conspiracy room, Craig put new batteries in the REM cube and the cube then began to work perfectly. One team member felt a breeze on his back, the team then decided to use the spirit box, Craig tried to turn it on but the lights came one but nothing was on the display, a few tapping noises were heard, the second attempt at the sprit box showed that it was now working but after a few seconds the lights went out again, the team then asked “do you like all of the work done on your house” the reply was “I might think so”.

After the break team 1 returned to the conspiracy room. The team decided to do some glasswork and placed the REM cube into a food bowl, at this point the cube went off on its own with no questions being aimed at it.

Whilst in the room the team witnessed various types of anomaly’s including the REM cube going off repeatedly and the K2 meters lighting up to orange and staying there, during the glasswork the glass tried to move but stopped abruptly, some of the guests said they could feel the glass trying to move but it didn’t.

The team moved to the top landing but nothing of any note was found there.

In the corridor leading to the glass door Craig was using a parabolic dish, Craig and Emily saw a figure at the glass door, the figure was small and had a white dress with sort sleeves. Tapping was heard on the glass, Emily asked for the child to play with Loressas hair at this pint Loressa commented on how she liked her hair to be played with and a few seconds after this Loressas hands went cold and Emily felt cold, at this point Emily asked if they could tap on the door so Loressa could hear it and a load tap was heard.

The Team tried a couple of other upstairs rooms but the rooms had gone quiet and they took a break.

After the break the team moved downstairs and things seemed to have gone quiet for the team, they moved into the meeting room and suddenly the REM cube started going off, the lights were flashing in the pattern of SOS, as we were next to a busy river that deals with cargo this could have been relevant to the location, the REM was moved around the room and it seemed to only go off at a certain level in the room, this appeared to be about waist height so it could have been a  child.

Before the team began the investigation one of the members of public found that whenever she walked into the kitchen she would suddenly feel very hot around her neck like sunburn, she left the kitchen to so what happened and immediately she cooled down, when she walked back into the kitchen she cooled down immediately. One of the team then saw a woman in white and thought it was another team member but when they went to look no one was there, the smell of cigar smoke was also in the kitchen. Various cold and hot spots were felt on peoples bodies, one team member felt hot on her back, another felt a cold spot on the hand.

Cheryl then lay on the table and felt that her head, face and neck was touched by an unseen source, the spirit box said the name “Pat” which was the name of one of the guests in the room with us.

The team then moved to the panelled room, on entering the first thig that was smelt was the smell of smoke, there was nothing in the room or in the house to create this.

Various noises were heard, like knocking and a scratching noise, Joy also had her chair pushed while we were in the room, we them decided to try using the crystal pendulum, after it indication how it would answer, the team asked if the person lived here, the response was NO, then the pendulum went quiet.

The Parlour and the Kitchen

We moved into the parlour and we has some words come through on our spirit box on the phone, one was Morgan and a few word relating to the sea but nothing relevant to the house, Emma felt a touch on her arm and a young girls voice was heard along with some singing and giggling, the team heard a noise in the next room so jade went to investigate, a shadow was seen going up the stairs into the small back room.

Half the team returned to the kitchen and Pat lay on the table, immediately Pat felt something pressing on her chest and found it hard to breathe, she also felt hot, Emma blurted out the word Tuberculosis without any reason, on the phone the word lesions came up immediately after this, the temperature then dropped to the point that all team members were cold and in some cases shivering, the hairs were standing up on everyone back and all felt very strange. It was then discovered that the heater was on full, this in itself was very strange as the heating had been turned off for the summer so no radiators should be one, the other team also confirmed that one of their radiators turned on, yet the rest of the house stayed cold.

Cheryl had felt and heard the name Adam during the night so she asked if there was an Adam there, at this point the phone came up with the words “my son”.

The name David also came up and it was discovered we were next to a pump that was made by David Mason, this name would return to us later.

Whilst in the conspiracy room the team decided to try out a new method led by Joy called the Human Pendulum.

The first team member managed to contact a man who wouldn’t tell us his name but said he didn’t live here he just visited and that he was in the navy, he said he was a local and indicated that the monarch on the throne was King George the 1st.

The second contact was also a male, his name was Nathanial, he was involved with the conspiracy theory and got caught, his children were with his and the name Chloe came up, he said he lived in one of the houses for a long time and he was on the run for quite a while. These details could be verified with the history book and it was known that a Nathanial used to live in one of the houses and Nathanial’s father name was on the death warrant we found.

We then ended in the bedroom, whilst in there we saw a feather flouting randomly across the room towards joys, the curtain around the bed was seen moving several times, the bedroom door opened when nobody was there to open it, and it was a heavy oak door so was not known to move in drafts, Jade also saw a mist while we were in the room.

Overall a very good night, we will be returning in the future.