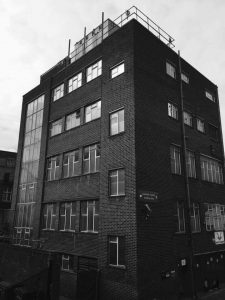 During the investigation the K2 meter went off several times where the stick man was set up in another corridor where a little boy has been see quite frequently.

In another room they had a BB ball drop and hit the wall when no one in the room was moving (it was still daylight and was visible to everyone in the room) there was also a scraping sound across the floor in the same room. BB balls moving on their own was quite a common phenomenon throughout the building and the girl’s team also had this happened to them several times with no explanation.

Kester said he heard what sounded like a beating sound and it turned out to be the barrels on the top floor if you rock them, no one was with in the room with the barrels at the time so this remained unexplained as the barrels were very big and heavy and take quite a lot to move them.

Craig had a hot sensation on the side of his neck on the top floor.

As Craig, Casey and Matt was going up to the top floor towards the end of the night, Craig and Casey were singing just the two of us (Bill Withers) and after we say the line “just the two of us you and I”, the spirit box clearly and loudly said “You” when at the time there was nothing coming through the spirit box, then it said ‘it’s on’ as we were walking up the stairs it then said loudly ‘Craig Jones’ all 3 of us were shocked, as yet we have found no explanation for this as at the time the spirit box was quiet both before and after this event.

While team 1 was on the top floor we asked what it’s name was it said something beginning with a “D” but none of us could work this out. Upstairs by the barrels we were asking out questions and Casey asked, who is your favourite person here it said ‘Craig’ in like a singing voice ‘Craiiiiig’ (this was all happening while the camera was recording so hopefully this picked it all up which will be shared).

Craig also felt like a hand grab around his leg which made him jump as he wasn’t expecting it.

Both Kester and Casey both saw a ball of light, Casey said he see a face in it and when Kester shined a torch at him, it went, later on Kester was placing the clown down onto the floor and saw the same thing appear in front of him which then moved to the room next to him. Kester quickly come back and explained what he saw. As they both described it, we realised that they had seen the same thing. They both explained it as like a torch like but dull as if it had a few layers of tissue over it. We heard a door slam twice when the other team confirmed that they were standing still. And the radios went off in both teams when no one was touching them. The girls heard voices and thought it was the boys when the radio was sitting on top of one of the barrels at the time.

In the snooker room Jade looked through an archway and she saw a full shadow figure move from right to left slow at first and the speed up also we heard the handheld radio go off while we were doing the spirit box when no one had said anything or touched it, we checked this with the boys team and they confirmed that their walkie talkie was on the wall at the time.

Whilst in the kitchen area we saw some of the balls move across the floor, this also happened briefly in the child’s bedroom, we checked for drafts from windows etc. but found none.

We also had a lot of action on the stickman where we had one member of the team stand in front of the sensor and ask questions, whilst this was happening there were several light anomaly’s and that kept moving up the wall and going over it, this happened over and over again, also the team member had her hair touched and at the very same time a light anomaly moved towards her hair and then disappeared, a figure tried to form near the team members feet but sadly its didn’t manage to complete the formation.

Two recordings were picked up on the night, these are still being analysed, also the girls K2 lights went but at the same time it made a noise, this in fact is impossible as there is no noise or speakers to allow a sound to come through, yet all members of the team clearly heard the noise come from the K2.

Loud banging was also experienced from upstairs and was recorded this was strange in itself as we were on the top floor at the time and the roof was inaccessible.