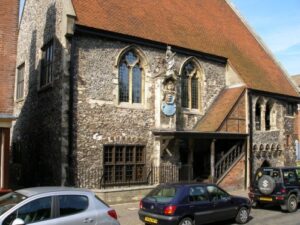 Built about 800 years ago, it would have been deemed a grand place, Sturdy stone walls, an intricately carved doorway, and arched windows. It was the home of a rich merchant whose livelihood no doubt depended on the nearby quayside c1150.

A short while after, the house passed into the hands of the Yarmouth town officials. So began its long association with the law, as the courtroom for various types of courts, the town gaol with the notorious dungeon known as ‘the hold’, and a police station, as well as the place for the receipt of port dues (taxes). The gaol itself held pirates, robbers, and murderers as well as countless common crooks. It has been attacked by rebels and rioters and gutted by enemy bombs.

In 1362 Stephen de Stalham, who had bought it from the executors of William atte Mawe, bequeathed it to his wife. In 1808 the Corporation purchased land west of the prison so that it could be extended. In 1819 the gaol could hold 30 prisoners. It was noted that the Corporation had purchased premises to extend the gaol so that prisoners could be properly classified. The gaol was enlarged by Francis Stone between 1818 and 1824 it continued in use until 1882 when the new Town Hall was built. In 1883, after the Corporation moved to the new Town Hall, the prison buildings west of the Tolhouse were demolished and the building was restored. It was used as a museum and library from the 1880s. The fortified first floor hall house illustrates an early adaptation of military architecture to a domestic use. It was bombed in April 1941 and restored 1960-1.

The Tolhouse Gaol is steeped in history and tales of Witches, pirates, and murderers. This Gaol has seen and housed them all.  Many of its former inmates and residents are said to still walk the once familiar corridors and cells.

There have been reports of being pushed and even scratched by unseen entities all over the building.

Chilling, echoed screams and voices are often heard from rooms of which no one is occupying.

Shadowy ghostly apparitions have been spotted. Perhaps a onetime pirate looking for revenge on those who left him in the cells. Or possibly a lady wrongly accused of practising witchcraft seeking out those who turned on her.