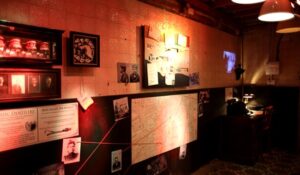 The True CRIME Museum is housed in a series of caves accessed via Palace Avenue Arcade at White Rock on the Hastings Seafront.

The Arcade and caves formed part of the Palace Court Hotel, built in 1885 by architect Arthur Wells on the site of a former brewery. (You will see that Cave 1 of the Museum is brick paved at a slight inclination to facilitate the rolling of beer barrels down tracks towards the bricked over entrance by our ‘Luminol’ exhibit.)

The caves were created by extending existing fissures in the sandstone cliff face. Miners from Cornwall who were working on local railway tunnels at the time were drafted in to do the work. (Their pick axe marks are still visible on the surfaces of Caves 1, 3 and 4.)

Built to profit from the popularity of the new Hastings Pier close by, the sky-scraping Hotel boasted superb views, luxury accommodation, drinking and dining provided by “Chefs from London’s top Piccadilly restaurants.”

It was tne of the first buildings on the south coast to be lit by electricity.

The huge, loud generators providing this power were hidden away in the caves behind the hotel and their fixing points can still be seen in Caves 3 and 4 of the Museum. These generators also powered the fabulous, central lift system which can be seen through the main entrance doors and were featured in the recent Neil Jordan Vampire movie, “Byzantium”.

The Hastings Chronicle of July 1905 reported that “Inquest into the death of James Orger, twenty-two years of age, a Porter at The Palace Court Hotel who plunged into the shaft of the lift could reach no verdict as to whether he was pushed, jumped or fell.”

In August of the same year, the Chronicle also reported that 20 year old American Ms Chrissell Swann attempted suicide by smothering herself in Belladonna Liniment in Palace Avenue Arcade which is now the entrance to the Museum. She survived and was remanded in custody where she later hanged herself.

The Hotel proved too expensive for most early 20th Century holidaymakers and closed in 1917. Canadian soldiers and RAF personnel were billeted in the Hotel towards the end of World War 1.

Druid ceremonies were already being conducted in the caves and it is likely that the raised platform in the Museum (now containing the original acid vats used by serial murderer John George Haigh), was built to hold the Druid altar. Fixing points for benches or pews can also still be seen in Cave 1.

Debauched musical and theatrical performances are also reported in the caves around this time, and though electrical and ventilation works were carried out, the Application for Worship was refused by the local authority despite a petition of nearly 1100 applicants including Crowley.

More recently, visitors to the True CRIME Museum have reported events of possible paranormal significance. There is a Christian Spiritualist Church neighbouring the caves and photographs taken during the surveys for the Museum revealed extraordinary imagery of glowing orbs and shapes. (These photographs are available for inspection)

In November 2014, the Museum’s Curator, Joel Griggs was monitoring the CCTV cameras when he witnessed “a hunched, scurrying figure enter Cave 2 via Ripper Alley. I thought it must have been someone who had come down the fire escape steps from above, so I ran in after the person and there was no-one there.”

Later that same month, two nurses from The Conquest Hospital Hastings visited the Museum. They left rapidly after reporting that they had received a message whilst standing before the skull of rapist and murderer Louis Le Fevre in Cave 4. The message requested invitation to their home.