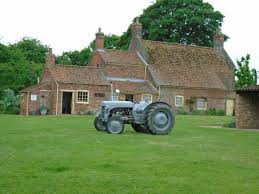 The Cambridge ghost hunters had a great investigation last night at the village church farm in Skegness! Thanks for our public guests that joined us and the staff from the village!

The Cambridge ghost hunters split up into 2 teams.

One team had a lot of voices come through on the spirit box, some voices were unclear, some voices were heard and a name Pete come through. In the war room one of the investigators picked up a medal, as soon as it was picked up, the rem cube went off, the investigator asked if they didn’t mind me touching it go to the blue light if not make it go red, it lit up blue. A little while later a voice come through on the spirit box saying ‘put it back’ the investigator asked if they would like him to put the medal back then go to blue if not go to red, it went to blue again. So the medal was put back.

There was also a few pictures of orbs taken throughout the night. The other team has some voices come through on the spirit box, most of which was unclear, they also had the rem cube go off in the war room. The team has stick man set up where the team members and public say on a chair in front of it and asked if they could be joined. It looked like one of the team members were joined, this footage needs to be reviewed.

Throughout the night the team had cctv set up all over the farm. There was a lot of orbs, one orb that kept spiralling and what appeared to be a black figure moving in one of the rooms. At the end of the night as the team went to pack away there was what sounded like cutlery Hitting against each other when there was nobody in the house. As the team went to investigate it, the team got to the bottom of the stairs and the door opposite opened on its own.

The Cambridge ghost hunter believe that the village church farm is haunted and we are looking forward to going back in the future.

Once again thank you for everyone that joined us on a great night!